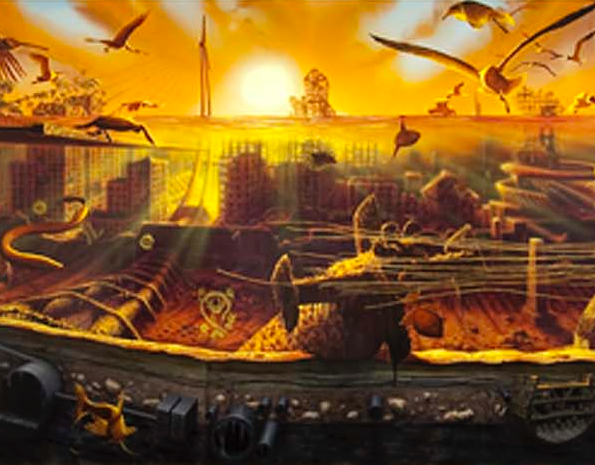 PreK-grade 8 Art teacher Carmen Jenkins-Frazier was interested in infusing global concerns into her prescribed curriculum for grade 4. Based on the scope-and-sequence provided by the district, in the visual art course the students were to investigate their identity through storytelling. She wanted them to create a triptych, but it wasn’t until a seminar through this project that she developed a plan that satisfied her. The project focused on creating a triptych about a global issue of great concern to each student.

Which global issues are important to me personally? How do artists bring awareness to global concerns? How can I create a work of art that addresses a global concern?

School Without Walls at Francis Stevens is part of DC Public Schools and is located in Ward 2 of the nation’s capital. A PK3-grade 8 school that serves students from all eight wards of the city, the average class size is 22 students. The school demographics are varied: African American 57%, Hispanic/Latino 12%, White 20%, Asian 5%, multiple races 5%. Students eligible for Special Education services represent 14% of the population, English Language Learners 5%, and Free and Reduced Meals 36%. School Without Walls at Francis Stevens believes in using the city as its classroom.

The learning goals for the lessons are to understand the meaning of global, to identify global concerns, and to create an artwork that addresses a global concern that the student has experienced personally. These learning goals are important to me because I want my students to be able to think more critically about the world in which they live, to be able to analyze artwork from a global perspective and understand the artist’s role and responsibility in creating art that addresses global matters. In addition, it is important that my students understand that art is an effective tool for expression and can be used as a platform for addressing such issues.

While participating in this project, I was grappling with what to teach my fourth graders. Based on the scope-and-sequence provided by DCPS, the students are expected to investigate their identity through storytelling. I knew that I wanted them to create a triptych, but I wasn’t quite sure about the content for it. It wasn’t until after a few seminars that I figured out how to fit global competence into the lessons. One particular experience in the National Portrait Gallery prompted me to develop my essential question: How do artists infuse their personal experiences with art making in order to bring awareness to global concerns?

On day one of the Global Connections in Art project, the objective was for students to reflect on their own personal experiences to bring awareness to global concerns. First, I presented the question, “How do artists infuse their personal experiences with art making to bring awareness to global concerns?” and then we discussed it. Before we could consider the role of the artist, I felt it necessary to get a pulse on the class to see if they understood the meaning of “global.” One of the students stated that global meant “All over the world”. The entire class agreed. Then I asked if Washington, DC, is a global place, and after a few moments of reflection, the room was divided on the response. So, I asked the students who felt Washington, DC, to be a global place to share why. Some of the students said that DC is global because people come here from all over the world, the embassies are located here, the museums have artifacts from other places and everyone recognizes the landmarks. After listening to the students, the others agreed that DC was a global place.

Next, I told students that they would write about a global concern they have experienced in DC. I explained that this experience could have been something that they saw, heard or participated in. I handed students small slips of paper and gave them five minutes to write. They had the opportunity to share and as they spoke, while I wrote a list of possible themes. The list consisted of the following concerns: homelessness, killing/violence, tragedy, theft, pollution, politics, service, and animal abuse. 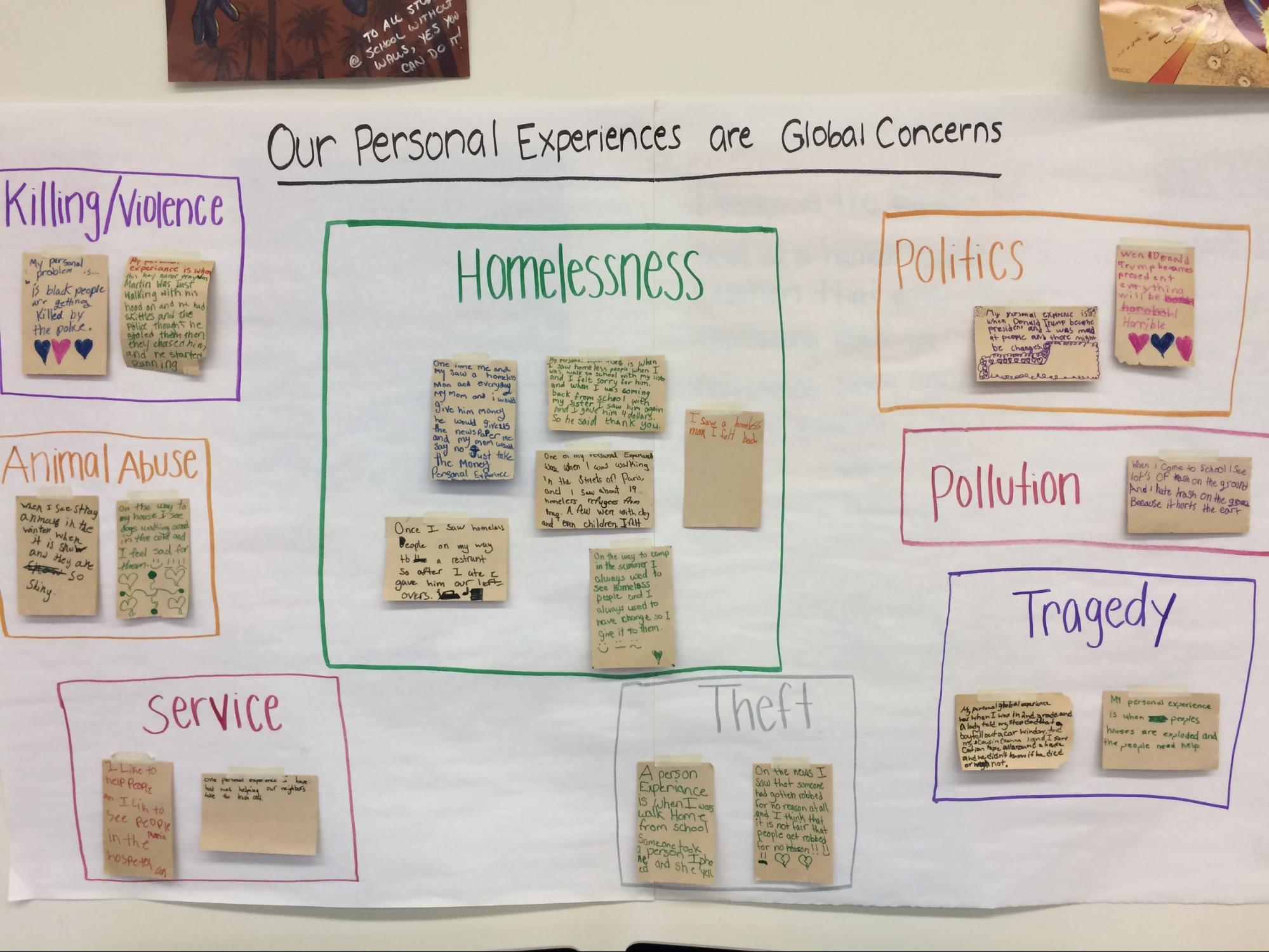 After the introductory class was over and all of the slips were categorized, I researched artwork that was created by national and international artists addressing the students’ list of global concerns. I selected six images because I have six tables in my room that were being used for the gallery walk. 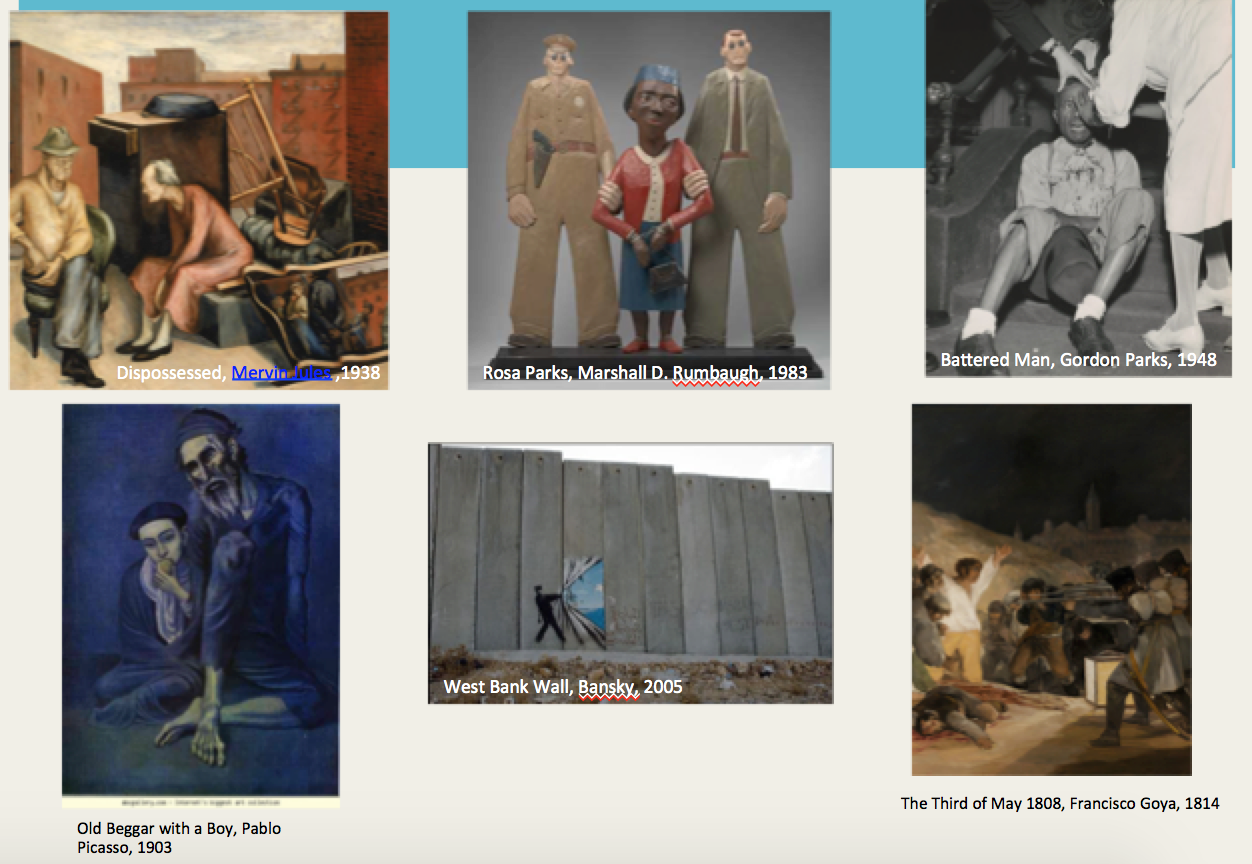 Step 2: Language of Global Issues and Analysis of Artwork

The learning goal for this exercise was for students to analyze artwork, based on their understanding of the language of global issues, that relates to their personal experiences and evaluate how the work speaks to global issues.

First, I presented the terms related to the global issues they had identified and reviewed the definitions of each. I also explained to the class that each word was associated with a color which they would use in their analysis of the artwork during the gallery walk. The terms were: Killing/Violence; Animal Abuse; Service; Homelessness; Theft; Tragedy; Politics and Pollution.

Then, I provided students with colored stickers that connected to the term and they engaged in a gallery walk. Students were able to identify the global concerns addressed; they also conversed and debated amongst themselves about the context of the artwork. Some students concluded that a few of the works had multiple themes.

After the first key learning experience, I felt that we were ready to dive into a Global Thinking Routine. I chose Unveiling Stories and paired it with Goya’s The Third of May. After asking the students to quietly look at the artwork, I went through the series of questions listed in the Unveiling Stories routine. We were going at a steady pace until we got to the question, “What is the human story?” A lot of students were not sure what to say. We bypassed that prompt and went to the next. Even though there was a small challenge, they seemed to enjoy the process. I decided that I would teach the Human Story concept in the following class.

We analyzed Gordon Parks’ Battered Man using the Human Story prompt. After doing a quiet reflection and having a small discussion, the students were asked to select a character out of the box and write a narrative. After the students finished writing, they reenacted the photograph and brought it to life. Visit this link to see the class in action! By doing this activity, the students gained a better understanding of explaining the human story.

I took the fourth grade students to the Smithsonian American Art Museum to view Manifest Destiny by Alexis Rockman because pollution was listed as a global concern by some of the students. Before viewing the artwork, I stated the questions that were going to be addressed at the end of the viewing: How do artists infuse their personal experiences with art making to bring awareness to global concerns? What do you think inspired Alexis Rockman to create Manifest Destiny? We began observation through Unveiling Stories. The students concluded that the artwork was about global warming/climate change/pollution. I read an excerpt from an article that validated the students’ observations.
We revisited the questions and the students concluded that Rockman was inspired to create the artwork to help people see what could happen if we don’t take care of the earth. Students also concluded that because he is alive, he has seen how pollution has changed the climate, but he also did research to support his claims.

Finally, the students created a triptych, which not only satisfied meeting the district goal of investigating identity through storytelling, but in this context offered meaningful way to demonstrate developing globally competence. Before creating the triptych, students revisited their initial global concerns that were addressed on day one of the project. From that, they were able to illustrate it in three panels. 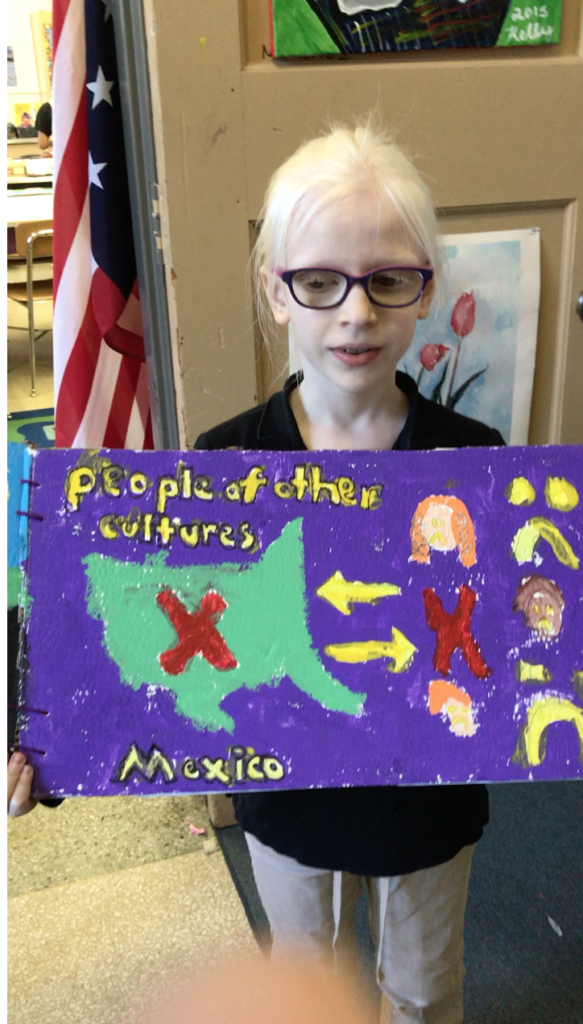 I think that once the students saw global concerns depicted through works of art, they realized that they were not alone in their experiences. They became more eager to share with each other. By using the Global Thinking Routine, students realized that art could empower them to take action by addressing the ills of society.

I didn’t know what challenges to expect when teaching the lesson because this was the first time teaching with this strategy. I was writing and planning as I went along. The one challenge that I did not anticipate was the students’ lack of understanding of certain terms and my having to re-teach one of the lessons. The reason I approached the lesson by telling the students what the goal was first was to build interest in the topic. As an educator, I want students to be excited about the work, but I also want to make sure they are prepared and aware of what is going to happen.

I think that Global Thinking Routines like Unveiling Stories can be used across disciplines if one first asks, “What is the role of the artist?” This question is a great entry point for those wanting investigate works of art and study the purpose behind them.

Carmen came to this project highly recommended by the arts coordinator for DCPS. She had little experience with Project Zero ideas such as Thinking Routines, but she embraced the goals of the project and took many risks along the way in her teaching. This unit came early in the semester, as students were just beginning the course.

What stands out in Carmen’s narrative is her careful attention to the way her students are understanding, or not understanding, the key elements needed in order to be successful with this project. When she saw that they were stumbling, she did not hesitate to try a different approach or to re-teach a lesson. She could see that they had strong interest in global issues but they sometimes had limited vocabulary with which to identify them. Carmen scaffolded their thinking to deeper and deeper levels, achieved through selecting challenging works of art and a Global Thinking Routine that called on the students to see layers of complexity in them.

This case illustrates the power of a Global Thinking Routine in the hands of a skilled teacher. Despite her inexperience in using Thinking Routines at the start of the project, Carmen came to facilitate meaningful exploration of three works of art with a routine.