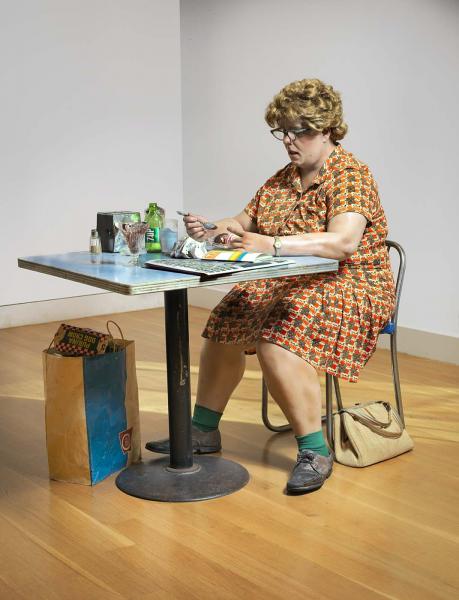 Not the Whole Story

An Exercise in Perspective-Taking

Follow-up to Study of Our Town by Thornton Wilder

During a unit on Thornton Wilder’s Our Town, middle school English Language Arts teacher Kristen Kullberg began to notice that learners in her grade 8 class struggled to separate their perspectives from that of the author of a text. Although the students consistently made space to hear and consider the diverse perspectives voiced by their classmates, they weren’t yet skilled in considering the perspective of Wilder. When investigating the unit’s overarching question, How and when does a text reveal the beliefs, values, and fears of the writer?, Kristen’s students would inevitably steer the conversation back to their beliefs, values, and fears touched on in the text. When asked about author intent, they often would reiterate their own experience as a reader of the text. This series of lessons was Kristen’s way of addressing this issue and offering the grade 8 learners a chance to dig deeply into authentic and purposeful perspective-taking.

How can considering others’ perspectives provide us with deeper understanding of ourselves? Our community? The world? How can art help us do this? How do artists and authors include details to show us a character/subject’s true self? Who counts? How do our assumptions shape our understanding of others?

This lesson was adapted from a collaborative lesson created by middle school English Language Arts teacher Anne Charny (Sidwell Friends School) and museum educator Elizabeth Dale-Deines (Smithsonian American Art Museum) called “Who Matters?.” After Anne and Elizabeth shared in our professional development seminar how the lesson was received in Anne’s 7th grade classroom at Sidwell, an affluent Quaker school, I was left wondering, “What would this lesson look like in my classroom with my learners?” The idea of engaging a second student population in a very different school and community context intrigued the three of us. Would the reactions and perspectives of my learners parallel Anne’s? How does a student’s life context (culture, language, socio-economic status, etc.) influence the acquisition and expression of global competence? Together, we decided to find out.

Sacred Heart School is a private parochial school in the heart of Washington, DC, that follows an innovative bilingual curriculum in an inclusive Catholic environment. The majority of our children’s families hail from El Salvador, are low-income, and eligible for Title I services. The student population includes 85% English Language Learners and 100% Second Language Learners.

Elizabeth Dale-Deines from Smithsonian American Art Museum (SAAM) visited my 8th grade English Language Arts classroom to co-facilitate the lesson. We focused on the thinking disposition of perspective-taking in order to promote global competence and critical thinking. We engaged in a close reading of the short story “The Cop and the Anthem” by O. Henry, followed by close looking at A Woman Eating, a sculpture by Duane Hanson. After thoughtful analysis of both works individually, students considered what larger, world story was being revealed when they considered, from multiple perspectives, the lives recorded in text, artwork, video and their own experience. 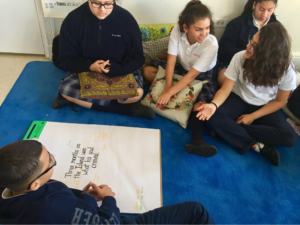 Step 1: Pre-Visit: Meet the Story
See-Think-Wonder thinking routine on this sentence from the short story: “Three months on the Island was what his soul craved.”

Step 2: English Language Arts Class Period: Reading of “The Cop and The Anthem”

Revisited thinking from yesterday:
Value-Surprise-Wonder thinking routine about our thoughts on the sentence shared yesterday.

See-Know-Care About
Students broke up into 3 groups of 4. Each group received an image of the artwork from a different perspective and recorded their collective thinking on these questions:

Small groups partner up with another to share out their thinking on their given perspective.

Whole Group Discussion: Comparing Perspectives
Gathered on the carpet as a class, we took turns sharing our thinking generated from See-Know-Care About. Together, we reflected on the uncovered differences in our thinking.

When reflecting on my students’ thinking, I wondered if their inability to consider the writer’s perspective was owing to his being invisible to them. By that I mean that O. Henry wasn’t physically present in our reading circle as we investigated the big ideas in The Cop and the Anthem. I began to wonder if my students would be more apt to consider Henry’s perspective if he would join our reading circle in the flesh. Besides this not being a realistic possibility, it also raised a larger concern. I worried that Henry’s physical absence in our space translated to his perspective not being heard which, in turn, meant his voice went uncounted and–worse yet–not even on the radar of my students’ thinking. I further worried about the larger implications of this on a global scale. I wondered if my students were disinclined or unable to consider the perspectives of other members of our global family–e.g., Syrian refugees, the guerrilla soldier in their native El Salvador–if they weren’t present in our immediate physical space. My hope with this lesson was to invite my learners to engage and reflect on the importance of mindful perspective-taking as well as consider the very real limitations.

We had two intentions with the chosen artwork. We wanted to use a piece that lent itself to perspective taking, and we wanted to be able to reflect on the differences we noticed in the lesson when used with Anne’s learners and mine. Elizabeth and Anne had already used A Woman Eating, and so we thought it best to keep that a constant. Having tangible items in front of us through which we considered different perspectives was hugely helpful. Being able to name the various perspectives represented by the images of A Woman Eating from different angles made the idea of perspective taking much more concrete for my learners.

I made my decisions with these lessons based on three factors: time, my students’ needs, and the learning goals. I knew that we would have a shorter amount of time in which to execute the lesson, which meant that we would have to edit it down a bit. More editing happened as a result of considering my students’ needs. Many of my learners are responsible for taking care of multiple younger siblings at home after school, meaning that homework is not necessarily a priority. Anne’s students did a lot of their reading at home before Elizabeth visited their classroom. However, I knew that we’d need to spend a large chunk of time unpacking the text together in class. I was also concerned that the text might be too elevated for my learners (especially considering that English is their second language) given the short amount of time we’d have together for reading it. I decided to adapt portions of the short story in the interest of accommodating both of these elements. With every edit I did, I always kept the learning goals in the forefront of my mind so that every decision I made promoted perspective-taking among my learners.

Art = access = understanding:
When we look at art together, we are engaging in an act of equity. There are no wrong answers. We are all building meaning together and the more voices we have in the conversation, the more interesting and complex it becomes. As we provide opportunities for our learners to engage in the wider world via art, they are developing essential thinking dispositions such as describing what’s there, building explanations, uncovering complexity, making connections, and considering different perspectives, each of which closely aligns to the four strands of global competence. Through this artful approach, our learners can grow as thinkers while also growing as globally mindful and informed citizens.

Tuning into what’s not there:
I’m not sure what role this plays in Global Competence, but I think it’s important… Many of the observations the kids made about A Woman Eating touched on what they noticed was missing from the scene.

In one student’s reflection, she shared a wonder that, from where I sit, speaks to higher level thinking and analysis of all the learning we just did together: what if we could only look at one perspective? Her question exhibits awareness of what would be lost or compromised if we were to “explore” an idea from only one perspective. In turn, this shows an awareness of how considering/weighing multiple perspectives gifts us with deeper understanding of the world around us.

Unanticipated challenges:
Instead of zeroing in on the big ideas Elizabeth and I had in mind (the unnoticed people in society, the assumptions we make about others…), the students were very focused on the theme of isolation while reading “The Cop and the Anthem.”
In the end, my students were more understanding and empathetic than I gave them credit for in my planning; i.e., they didn’t voice as many blind assumptions about Soapy or the subject of A Woman Eating as I had anticipated they would, which is wonderful in many ways but also served as a challenge when Elizabeth and I tried to name them / bring students’ attention to them.
I was challenged by the revelation that my students didn’t know that prostitution was illegal. I need to think more about this, but it has very much resonated with me.
One big challenge I’m thinking a lot about now is the necessity of cultural sensitivity. In that, I mean not only that we are responsible for being culturally sensitive to other cultures, but also the culture of the classroom.
If we’re inviting our kids to talk about the big world out there, but they’re not afforded the freedom of cross-border travel, how can we address this with empathy and understanding? If we’re asking kids to deeply and heartfully consider the lives of others, but they’re unable to visit with their own families abroad, how can we make space for these narratives? I’m very much challenged by how to balance these tensions in a mindful, respectful, supportive way.

This series of lessons planned by Kristen, inspired by Anne and Elizabeth, and co-facilitated by Elizabeth, provided her with many new insights into the students’ thinking: that they had more empathy and understanding than she gave them credit for; that they were quite skilled at letting the details they noticed guide an interpretation and not rush to judgement; and that they were learning to value various perspectives on the world as a way to inform their own perspective.

Kristen balanced various types of thinking routines in an intentional way so that the students would dig more deeply into perspective-taking. She used carefully chosen art and literature selections to extend her students’ thinking. As a result, the work Kristen engaged in with this lesson led her to infuse this kind of approach into the other courses she was teaching as well.